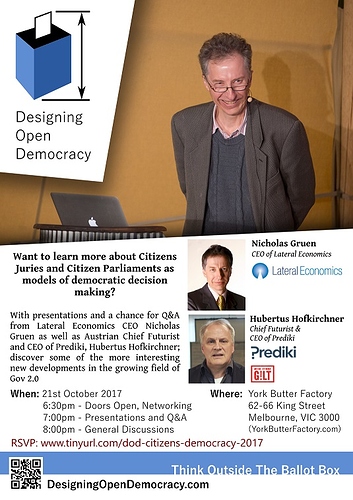 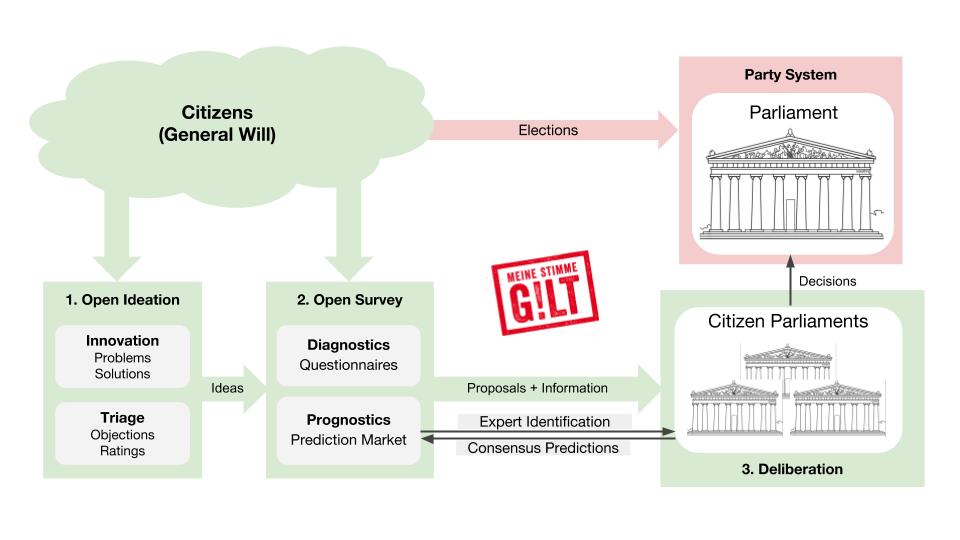 “Detoxing Democracy: is there a simple solution to a complex problem?”

Analogy: society being optimised for things evolved on African Savannah
- applies to industry, aspects of our lives
- liked clean food, rich in fat, sweet
- getting exactly what we’re asking for vs “nasty poiticians”

1.Division of cognitive labour
- fundamental issue: navigate division of labour
- essentially: simple orgs have to break themselves up
2.Engine of engagement: emotion
- no rational reason to vote, infinitismal chance to influence to vote
- politics run by emotion
- ’feminine emotions’: bind together from within
- ’masculine emotions’: ‘ill’, emotion for many, reason for the few
- balance of emotions:

What kind of emotions, look at origins

Solutions people want to build introduced for other problems

Story of past 3 months, group in Austria - more direct participation of citizens in parliament

Issues he aims to solve

People say what they think before they think e.g. stock exchange, before elections

Thus he started the Prediki project.

New Demarki: should not have party democracy

Prediki, is a software that allows for sentiment analysis on rate of comments; dissection of arguments

Current issue in modern politics is that people expected to be dissatisfied; yet voted the same; think after election it will be better:

How will Prediki software work?

Q: People aren’t engaged; not aware they’re not in democracy; media doesn’t tell them their choices. How to get to people if not aware of?

Q: What sort of result would you need in the next elections before you can get a representative into parliament to demonstrate

Q: Is there an algorithm for selecting a citizen’s jury - as representative as possible?

Q: Theory looks at whole of Government, functions in terms of getting things done. Problem in respect to democracy: parties, representatives, bureaucracy.

Proposal: instead of parties, elect people to perform specific functions. People would elect based on experience.

Q: About interest groups. Concern: parties doing things in interest of big donors, gamers of ‘the system’ i.e. manipulation, corruption. How would you stop that in your proposal?

Q: If you manage to get a representative into parliament, how is it going to work with the normal representative, they’re assumed to be an autonomous actor in the parliament

Q: G!lt’s representative placed in parliament, elected on assumption to follow through on system. No way in current workings in government they follow the consensus.

Q: Not sure about the difference between Nick’s and Hubertus’ proposal

Brian, Christian and I will be planning the short and medium term future for Designing Open Democracy - the key question will be how to best advocate for interaction between the stakeholders involved in reforming or developing democracy with activity or projects.

In the spirit of ‘openness’, the meeting is open to anyone who wants to help contribute!

Thanks to all who were able to attend the Citizens’ Jury Event! Presentations were interesting and we thank Nick Gruen and Hubertus Hofkirchner for presenting their proposals to improve democracy. If you missed out, there’s a youtube video of Nick Gruen’s presentation here (https://www.youtube.com/watch?v=0G55N7kdZJY) (and the slides from his presentation are here (https://drive.google.com/open?id=0BzE34qpoZvoIdXRscS1ZTGphTjg)), a link to the recorded podcast from the night (https://drive.google.com/open?id=0B_CxDJdeqkGMZERfSGJvMGFZSjA), and the Open Google Doc with the notes we took (https://docs.google.com/document/d/1-gN-Cqj_KEvNPSLqN4BRWi2xy6Sd-0iBXq58Wd6G970/edit?usp=sharing).

We’d love to get your feedback on this, so please let us know if you find this post-event media useful, and what areas could be improved for next time!

In any case, we’d be interested to get your thoughts on how Designing Open Democracy can help reduce the gap between democracy reformers and other key stakeholders.

Hope to see you there!

After the above presentation, the next one was a strategy meeting. Where most importantly we have a spreadsheet of known democracy related organisation:

Hi Everyone, thanks for those who were able to make it!

At this stage, and resulting from the meetup, we are creating an accessible database of the democracy reform ideas out there, with a view that this could be a valuable resource for people to search for the appropriate idea for their situation or needs, and maybe help spark renewed debate and collaboration between groups and ideas.

Feel free to add any that we’ve missed or to flesh out the descriptions of these ideas here!:

We plan to post this on our website in an accessible format, but we need the info first! We also hope to make contributing and viewing more user friendly than google docs, so if anyone can help us with creating and maintaining a dynamic website, please let us know!

What are the two issues relating to democracy that needs public traction? (The Main Question After the 20th of March 2019 Meeting)